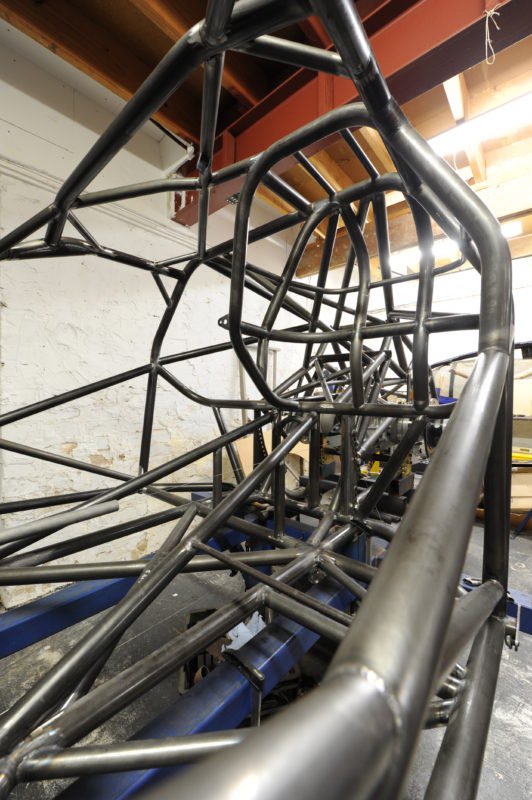 Here we have some info about our race car in the build.

It started off as a Nissan S15. There is still some parts left of the original car, not much, but some. It still has the roof, quarters and sills. Everything else is either carbon, fibreglass, chromoly or billet aluminium.

Built in house, using the latest parts, either custom made, or from renowned suppliers such as RJ Race Cars, Tim McAmis Race Cars or Jerry Bickel Race Cars.

We started out by designing and testing the chassis on the computer. We built it to the minimum size tube specs required by SFI, and stress tested the chassis, using Finite Element Analysis (FEA) and found quite a few areas where we could improve the rigidity. We re-did this several times before getting it ‘right’, and then proceeded to build it. It has quite a few little things in it, not visible to most.

Engine is a Nissan VK56DE out of a Nissan Titan from the USA. It is the same engine from the Nissan Patrol in Australia. It is also the same engine that Kelly Brothers Racing use, in the Nissan Altima’s that they run in the V8 Supercar Series, although it is de-stroked to 5L to suit rules.

Investment cast alloy, 6 bolt mains and looks to be of a high quality, well thought out engine. Time will tell.

We have a Garrett GTX4202 mounted down low on each side, with boost controlled by precision 46mm wastegates, and a pair of Tial BOV’s. Also you will notice a small wastegate on the inlet, to assist in controlling boost on the start line.

Inlet manifold is a custom 16 injector one, from Shauns Custom Alloy, in Sydney, Australia.

Engine management will be sorted using the latest and greatest from Emtron Australia, the big boy of their range, the KV16, with a sensor on pretty much everything.

Not much else to tell, the pics give you a good idea of what is going on, check them out in the gallery, here.